New report: Nick Saban will be next Texas head coach 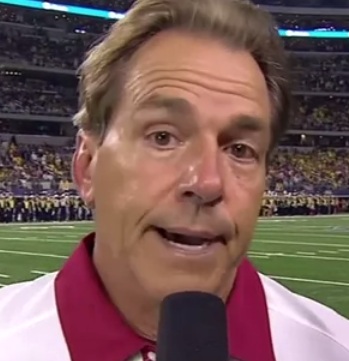 The Nick Saban rumors are starting to get out of hand.

Not long after we shared a report saying that Saban was in contract extension talks with Alabama that could pay him $7 million per season, another report emerged saying Saban will be the next Texas Longhorns head football coach.

As improbable as that sounds, the report did come from a very legitimate source — Stefan Stevenson of the Fort-Worth Star Telegram.

Source close to Texas executive council of regents says Nick Saban will be next Longhorns coach.

Then there was this from Bobby Burton of Texas 247:

SOURCE: On who would be best choice to succeed Brown. "I think (Saban) is surest bet." http://t.co/OWueTLRE8k

WWLS’ Dean Blevins wrote about what Texas is offering Saban:

These are just rumors and reports at this time, and I would be seriously shocked if Saban left Alabama.

In response to previous rumors about the subject, the 62-year-old Alabama coach said he was too old to go elsewhere and start over. Of course, nobody will ever forget how Saban, while the head coach of the Miami Dolphins, said he wasn’t going to take the Alabama job. Not too long after that, he became the head coach at Alabama.

Like I said, I would still be very surprised if Saban left Alabama, regardless of what these reports are saying.

In a related story, more and more reports are confirming that Mack Brown will step down at
Texas. Brown and his agent said he wouldn’t be stepping down, but ESPN, Rivals and CBS Sports have all confirmed the initial OrangeBloods.com report. Maybe this latest Saban to Texas report is a scare tactic from agent Jimmy Sexton intended to get Alabama to offer more to keep their coach.