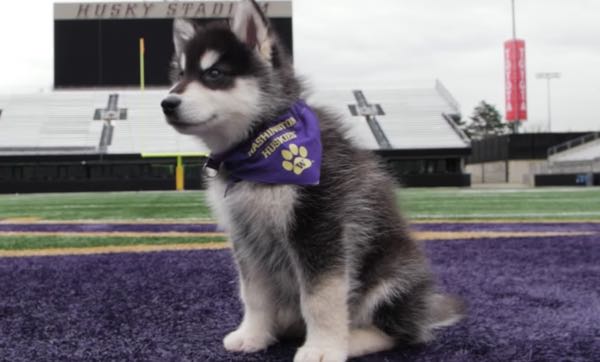 The Washington Huskies are welcoming a brand new face this year, and he has already been spotted on the practice field more than four months before the start of the regular season.

On Monday, the University of Washington introduced its 3-month-old mascot-in-waiting, who goes by the name “Dubs II.” UW’s current mascot, “Dubs,” will be retiring after the upcoming season, at which point his younger Alaskan Malamute replacement will take over. Davina Gruenstein, a Washington alum who will be taking care of Dubs II along with her family, says the pup has a long way to go before he’s inserted into the starting lineup.

“He has a lot training ahead of him. If we have fireworks (at an event), we need to get him used to fireworks,” Gruenstein told Ryan Clark of The News Tribune. “To be able to that run out of the tunnel, there’s a lot of training involved in that. Being used to the sound of a 70,000-person stadium, that’s a hard thing to train him thing for.

“So we he won’t have full-on commitments this year. He’ll be in training. He’ll be at the games, doing things along with Dubs I just to get used to it.”

For now, Dubs II will continue to watch from the sideline and draw huge crowds at practice. With a face like this, what else would you expect?