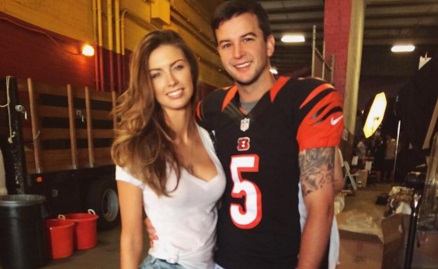 AJ McCarron had the best support team of all entering his first career NFL playoff start for the Cincinnati Bengals, and it’s thanks to his wife, Katherine Webb.

Webb, who became famous during Alabama’s national championship game when she was shouted out by Brent Musburger for being McCarron’s attractive girlfriend, has remained together with the QB ever since then. Not only did they get married but now Katherine is pregnant with what will be their first child.

Luckily she’s not so far along in the pregnancy where she can’t attend games. She was in the house Saturday night for the Bengals’ game against the Pittsburgh Steelers, and she was pumped.

Going to be a packed house tonight!! Countdown to kickoff 35 minutes..Ahhhh!

Katherine and AJ should be used to the pressure. McCarron played in two national championship games in college.