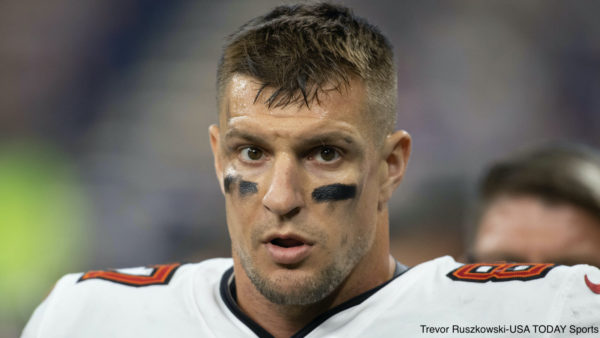 With Rob Gronkowski having officially signed with the local retirement home, the Tampa Bay Buccaneers may be pivoting to another tight end.

Jeremy Fowler of ESPN reported on Thursday that the Buccaneers have registered interest in free agent tight end Kyle Rudolph ahead of training camp. Fowler notes that a potential Rudolph reunion with the Minnesota Vikings is also a possibility.

The two-time Pro Bowler Rudolph spent last season with the New York Giants. He appeared in 16 games, catching 26 passes for 257 yards and a touchdown. Rudolph has some wear on his tires though, as he is about to enter his 12th NFL season and will turn 33 in November.

Incumbent Bucs tight end Cameron Brate should sop up some of the targets left behind by Gronkowski, particularly in the red zone. But OJ Howard also exited Tampa Bay in free agency, meaning the team could use another tight end to make up for Gronkowski’s departure. As for if Gronkowski himself might somehow return after announcing his retirement last month, we appear to have our answer to that.