Jack Doyle got away with shove before Ravens penalty You know what they say: NFL officials never see the instigator, just the person who retaliates. And Indianapolis Colts tight end Jack Doyle took complete advantage of that on Monday night.

Following a second-and-20 pass that picked up just two yards with 13 seconds remaining in the fourth quarter, Doyle mushed the head of Baltimore Ravens cornerback Tavon Young into the ground. Young immediately popped up and shoved Doyle, who flopped so bad it made LeBron James jealous.

Lol at refs penalizing the Ravens for retaliating after Jack Doyle did this pic.twitter.com/HjWpKpctcL

Doyle deserves an academy award if the Colts pull this out 🤣
pic.twitter.com/njL8WHGagO

Officials quickly threw a flag and called Young for an unnecessary roughness penalty. That gave the Colts an additional 15 yards, a fresh set of downs and set them up in field goal range. All Rodrigo Blankenship had to do was connect from 47 yards out and the game would be over.

But divine intervention stepped in. Blankenship’s kick sailed wide, the game was sent into overtime and after winning the coin toss, Baltimore went 68 yards on 10 plays for the game-winning score.

Although Young’s shove of Doyle was undisciplined and nearly cost his team the game, Doyle’s actions should have been penalized and will likely be fined later in the week. 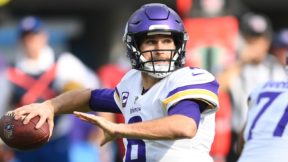