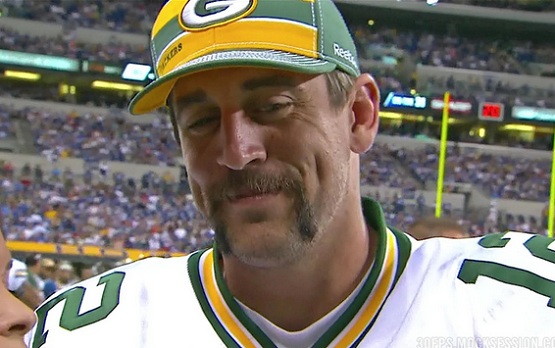 The Philadelphia Eagles did not at all enjoy the feeling of being embarrassed on Sunday Night Football while the Green Bay Packers were out there laughing it up and enjoying themselves throughout the blowout. In fact, linebacker Brandon Graham was particularly peeved at Aaron Rodgers.

Rodgers’ smiles and smirks during his 341-yard, 3-touchdown performance were too much for Graham.

“Hell, yeah. That sh– pissed me off,” Graham told CSN Philly’s Geoff Mosher. “I wanted to get him. But at the end of the day, shoot, he was doing his job. More power to him. I guess we would be laughing if we were sacking him.”

Mosher says Eagles players were irked at seeing Rodgers have fun at their expense.

“It’s just one of them things where you want to smack that smirk off his face,” Graham said. “But I mean they definitely came to play. I’ve got to take my hat off to him. That’s the first time I have ever seen that.

“We started talking about it toward the end. We were like, ‘He’s been laughing at us all day.’ He’s a good quarterback, man. I would love to see him in the playoffs. You definitely have to get after him.”

Graham at least has a good attitude about it. He was bothered and insulted by Rodgers’ demeanor, but he knows what he wants to do: get even by beating the Packers in the playoffs. They might get the chance.