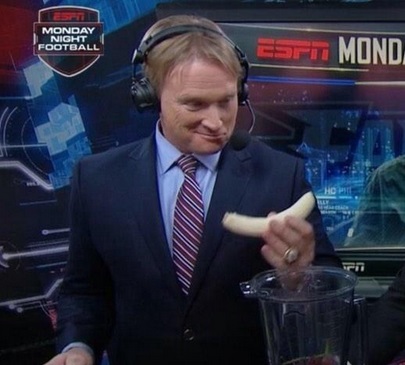 All those rumors about NFL teams being interested in Jon Gruden have certainly paid off — at least for the former coach.

According to information shared by James Andrew Miller, the author of the ESPN book, Gruden makes around $6.5 million a year to serve as an analyst for ESPN. The matter came up when a fan inquired about Gruden’s salary to SI media reporter Richard Deitsch, who then turned it over to Miller, who came through with a response over Twitter.

.@richarddeitsch @Timhedus In a word, Gruden. $6.5 Million — give or take a few pennies.

That is major money and would definitely explain why the former Super Bowl winner is content remaining as a broadcaster rather than returning to coaching.

Gruden analyzes the weekly “Monday Night Football” games, some college football games, comments on the NFL Draft, and does his quarterback camp feature for ESPN. He certainly is a presence on the network, but it’s not like he’s on there daily, so that is a lot of money to pay him. But when there is a seemingly annual threat of NFL teams coming to hire him, ESPN needs to pay the man or risk losing him, which would explain the high pay.

If the figure is accurate, then that means Gruden is making more money than his brother Jay, Cowboys head coach Jason Garrett, and Super Bowl-winning coaches Mike McCarthy and Mike Tomlin, among others. That’s good money if you can get it, and it sure explains why he constantly turns down NFL jobs. Less pressure, more visibility, more security … why not?