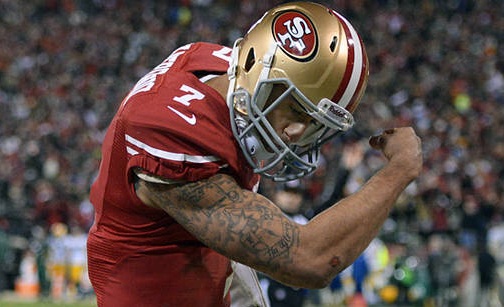 Colin Kaepernick‘s touchdown celebration of kissing his biceps inspired a social media trend much like “Tebowing” or “Griffining.” Though “Kaepernicking” appears to be kissing one’s biceps in celebration, the San Francisco 49ers quarterback says there’s more to the act than just that.

Kaepernick defines “Kaepernicking” as kissing one’s tattoos. He told CBS’ Dan Marino that he started it as a response to an article that criticized him for his tattoos.

“To me, it’s someone’s opinion,” Kaepernick said of the article criticizing his tattoos. “My tattoos are me expressing myself, my faith, and what I believe in.”

He also explained how “Kaepernicking” came about.

“That kind of came about from that article. Just kind of showing that I love my tattoos regardless of what people think. I also have ‘faith’ down the front. That’s also my way of showing that everything I do and have been blessed with has come from God.”

Below you can see what Kaepernick’s tattoos look like: Tom Brady’s return to Gillette Stadium next week was already a massive deal, but Brady’s performance Sunday just made it even bigger.
Though the Tampa Bay Buccaneers lost to the Los Angeles Rams on Sunday, Brady put up a huge s