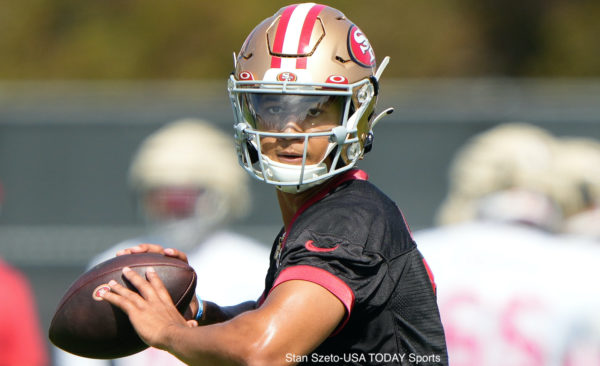 Trey Lance has supposedly spent more time studying the San Francisco 49ers’ playbook this offseason than any other player on the roster, but head coach Kyle Shanahan seems skeptical of the metric that was used to determine that.

Peter King wrote about Lance and San Francisco’s quarterback situation in his weekly column for NBC Sports on Monday. He said the Niners gave every player an iPad with the team’s playbook loaded on it, and the team has an internal server that allows them to see how often a player logs in. Lance has registered the most minutes, according to King.

Shanahan told reporters on Monday that he was unaware of how many minutes any individual player had logged. He then joked about how easy it would be to open the playbook and put it aside, making it look like a player was working harder than they actually were.

The #49ers can track how many hours players study the playbook on their iPads. Trey Lance has spent the most time, per @peter_king.

Kyle Shanahan when asked about it: “I also know how electronics work. You can press play and watch a movie and act like it was on for 8 hours." pic.twitter.com/00YCSjBN8S

That continues a theme of Shanahan seemingly going out of his way to keep the Lance hype under control. He was also asked on Monday about the rookie splitting first-team reps with Jimmy Garoppolo, and he said that is not going to happen anytime soon.

“No, we’re not splitting reps up,” Shanahan said, via David Lombardi of The Athletic. “I thought Trey had one of his better days Saturday, but that’s nothing to move him up there with Jimmy or anything like that.”

The 49ers obviously believe Lance can be their starting quarterback sooner rather than later. That is evident with the aggressive plan they have in place for him during training camp. It is also evident that Shanahan wants the No. 3 overall pick to earn everything.