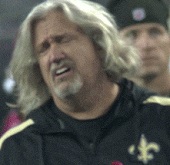 If you thought athletes were the only sports figures whose appearance and image were judged, you were wrong. The same also applies to coaches, too. In fact, some NFL people believe Rob Ryan needs to change his appearance in order to receive more consideration for head coaching opportunities.

ESPN’s Chris Mortensen said on “NFL Insiders” Monday that a lot of people were “truly impressed” with the coaching job Ryan did as the defensive coordinator of the New Orleans Saints this season. The Saints went from allowing the second-most points in the league and most yards in the league last season to ranking fourth in the league in both categories this season. That’s quite the turnaround, and it even led Dallas Cowboys owner Jerry Jones, who fired Ryan after last season, to admit he made a mistake.

So why isn’t Ryan receiving more consideration for head coaching jobs the way other coordinators are? Mort says NFL executives told him they feel Ryan needs to cut his hair to present a more professional look.

“If he wants to be a head coach, he has to cut his hair,” executives have told Mort. “It is about image for these guys. They want a CEO-type. That’s what they want.”

This isn’t the first time we’ve heard about physical appearance mattering for head coaching jobs. Charlie Weis famously underwent gastric bypass surgery to lose weight so he could be more presentable as a head coaching candidate. Though he had serious health complications from the operation, he ended up being hired for the Notre Dame head coaching job.

Is this fair or right? Does it really matter what the head coach looks like? What really matters is how he coaches and how well he runs his team. But I guess owners don’t want a coach to embarrass them with their looks.

So if you thought Colin Kaepernick was the only one being judged on his looks and perceived unprofessional image, you were wrong.