Steelers, Packers fans were so upset with CBS over TV decision 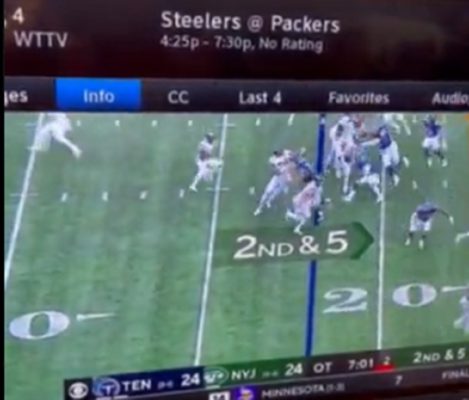 CBS upset a large number of NFL fans on Sunday with their decision in the afternoon.

CBS’ national game for the second wave of games in Week 4 was Pittsburgh at Green Bay. Both of those teams have huge fan bases, and there is also a good deal of national interest in a game between the well-known teams and quarterbacks.

However, most national viewers were unable to watch the first quarter of the Steelers-Packers game because CBS aired the overtime of the Titans-Jets game instead.

Fans who did not live in the Packers and Steelers markets, and those without the Sunday Ticket package, were unable to see the first quarter of the game. Take a look at the reaction on Twitter:

CBS, you are really making us watch Jets-Titans overtime instead of Packers-Steelers? Really?

What're we doing here, @CBS?
Both people outside NY & Nashville who care about the Jets/Titans OT will understand if you switch to Steelers/Packers

Who at CBS is making the call to have the Jets-Titans overtime game take priority over Packers-Steelers coverage? I understand staying on those games in the New York/Nashville markets, but this is terrible.

So we're sitting here watching the full OT of a horrible game that wasn't even on here locally and missing the start of the Packers and Steelers??? WTH, @CBS

Ok, love the effort Titans, BUT CAN WE GO TO PACKERS/STEELERS CBS, PLEASE🏈 pic.twitter.com/6mdCNyRgEH

CBS need to FIRE the idiots that decided to show the OT of the Jets and Titans game instead of the Packers and Steelers. QUIT and make me happy

Hi #cbs I don’t care what happens in the jets and Tennessee game turn it to the packers and Steelers already!!! #gopackgo

CBS. I'm begging you. Please switch over to the Packers-Steelers game.

Thank you @CBS, @DIRECTV, and @NFL for making me miss the first quarter of the Packers-Steelers game, and having to suffer through the Jets-Titans game.

And Pat McAfee did a video on it, dropping a few F-bombs.

The Jets got their first win of the year, beating the Titans 27-24 in overtime. But few people cared about the outcome of that game compared to the Steelers-Packers game.