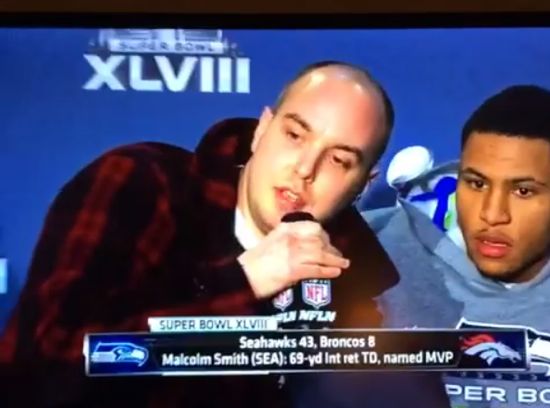 One of the most bizarre moments from Super Bowl XLVIII came during Super Bowl MVP Malcolm Smith’s postgame press conference. While answering questions from reporters, Smith was suddenly interrupted by a conspiracy theorist who said America was responsible for 9/11. That man has been identified and arrested.

Matthew Mills, a 30-year-old from Brooklyn, was taken into custody and charged with trespassing. Mills appeared to be wearing some sort of credential around his neck when he grabbed the microphone, clearly startling Smith.

With an event as big as the Super Bowl, you wonder how this nut job was able to get a media credential and then make his way right up to the podium. Fortunately, the encounter turned out to be harmless. Hopefully security is tighter in the future.