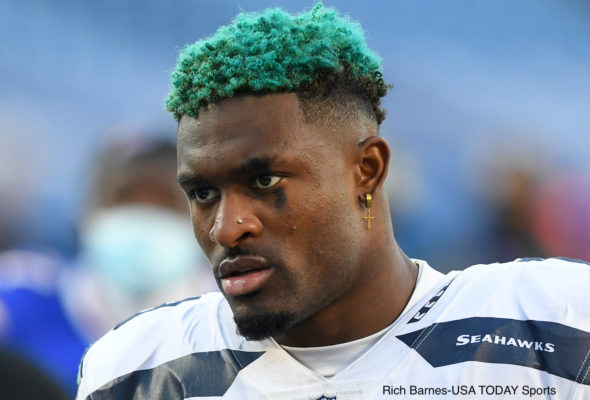 DK Metcalf had some alleged information about his private life leaked by a woman earlier this week, and the Seattle Seahawks star is now being trolled by his own teammates.

An OnlyFans model named Tori Lynn shared screenshots and videos of her interactions with Metcalf on social media. She said the star receiver reached out to her about a month ago and they began talking and hanging out. Lynn claims she made plans with Metcalf to drive to his house earlier this week and he abruptly stood her up when she was on her way to Seattle.

Understandably upset, Lynn says she removed Metcalf as a friend on Snapchat. She claims Metcalf told her it was too late to come over and that she should turn around and head home. However, he then reached back out at around 1 a.m. and told her he wanted her to come over to have a foursome with him and two other women. She shared a screenshot of the Snapchat she says Metcalf sent her. The video below shows it, but beware that it contains inappropriate language:

Metcalf, who is single, poked fun at himself on Twitter after the story went viral. Seahawks fullback Nick Bellore then took a hilarious swipe at Metcalf and asked his teammate to join him in a golf foursome next week.

I guess it’s a bad time to ask if you want to be our fourth at Chambers Bay next week? I thought I’d ask a teammate and not only fans…

This certainly isn’t the first time we’ve seen an NFL player put on blast for what he does in his private life. Metcalf doesn’t seem that bothered, especially if his teammates feel they can take hilarious swipes at him over it.