Teammate who can relate tweets uplifting message to Jimmy Garoppolo 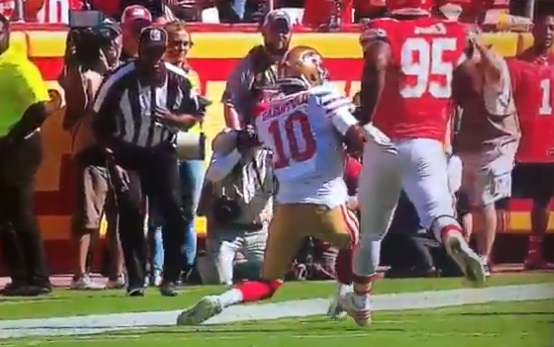 San Francisco 49ers quarterback Jimmy Garoppolo will miss the rest of the season after the team announced on Monday that he suffered a torn ACL in Sunday’s game, and one of his teammates can certainly relate to being dealt such a significant blow.

Running back Jerick McKinnon, who tore his ACL during practice before the season even began, tweeted an inspirational message to Garoppolo after hearing the bad news.

I am my brothers keeper! We will get through this together my brother @JimmyG_10

McKinnon split time in the Minnesota Vikings’ backfield last year with Latavius Murray, but he was expected to play a huge role with the Niners after they signed him to a four-year, $30 million deal this past offseason. With both him and Garoppolo out for the year, Kyle Shanahan will need to be more than a bit creative to find ways to score points.

Garoppolo has also received support from a former teammate who knows how he feels, but that probably won’t make missing the entire season any easier.