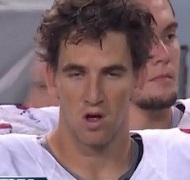 After Eli Manning threw his fourth interception in a 23-0 loss to the Seattle Seahawks on Sunday, a fan with a young sounding voice yelled out “You suck Eli, you suck!”

The fan’s taunts were captured by FOX microphones and heard during the telecast.

Manning really was terrible in the game. He went 18-of-31 for 156 yards and five interceptions. The only thing worse than Manning throwing five picks was this idiot writer actually picking them to win the game.

Elisha now has 16 touchdowns and 25 interceptions on the season. Surprisingly, the 25 picks isn’t even a new career high for Manning yet — it just ties he previous mark.

But back to the taunting fan, let’s look at a difference in cities here.