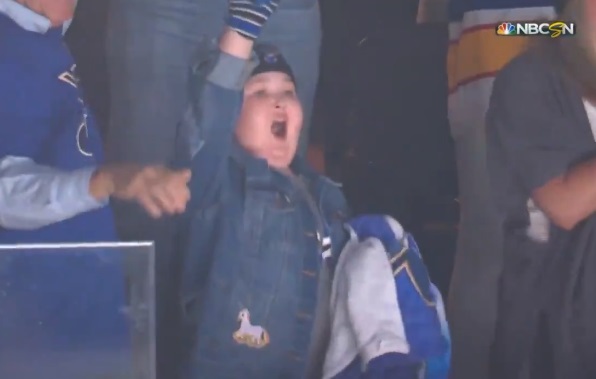 The St. Louis Blues’ run to the Stanley Cup Final has been unexpected and inspiring, and their surprising journey is matched by the energy and passion of their superfan, Laila Anderson.

Anderson is battling a rare disease called HLH, a systemic inflammatory syndrome. The 11-year-old is a huge Blues fan and met one of her favorite players, Colton Parayko, during an event at St. Louis Children’s Hospital on Halloween. She’s developed a friendship with Parayko that’s continued since then, and she’s become an inspirational figure for the franchise.

As she’s battled her disease and gone through treatment, she says the Blues “have been my inspiration this whole time. And I kind of feel like I’m their inspiration a little. I hope that’s the case,” she told the St. Louis Post-Dispatch.

She attended Game 3 of the Western Conference final against the Sharks after receiving clearance from her doctor to finally leave the house after four months and showed her emotion in this video that went viral:

When the #stlblues take the ice for Game 3 on Wednesday, they'll have a very special guest in attendance. https://t.co/RNtsGKIaXX pic.twitter.com/M2vVVwl10P

Anderson was at Enterprise Center in St. Louis for Game 6 when they clinched. She met star athletes from the city’s other team, the Cardinals. Adam Wainwright shared a photo of him and Yadier Molina with Laila:

Got to meet a very special person tonight! Laila we were so blessed to meet you! We are all here cheering on our ⁦⁦@StLouisBlues⁩ and wanted to meet the secret weapon!!!Prayers up for you tonight! You are an inspiration!!!! pic.twitter.com/YNY3E8KCJ3

Anderson became so popular that she was shown on TV by NBC Sports Network during the game:

Seeing joy like this brings a smile to your face.

It really is more than just a game. pic.twitter.com/oQHfARDovi

She celebrated with some of the Blues’ players after they clinched and even served as a reporter:

Hear from our guest correspondent Laila Anderson as she previews the #StanleyCup Final with the @StLouisBlues's Alexander Steen!

Anderson is planning to be in attendance for the Stanley Cup Final. And if you’re wondering whether her inspiration is hype or genuine, watch this video of Parayko talking about her.

Colton Parayko talks about how much Laila Anderson means to him … someone's cutting up onions nearby, I swear. pic.twitter.com/L38C23YMFR

To put into context just how improbable this Blues run is, the team was last in the NHL on January 3. Now they’ll be facing the Bruins in the Final, and they’ll have Anderson in their corner.