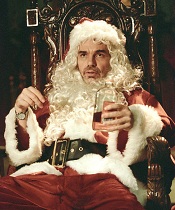 A man who was acting as Santa Claus at a festival in Toronto was fired for telling a young boy that the Maple Leafs suck.

The Santa apparently showed up 30 minutes late for his gig at Lowe’s Toronto Christmas Market and then proceeded to insult a 3-year-old boy.

“The first thing he tells my son is, ‘Oh, you look like Paul Bunyan,'” the child’s mother told the Toronto Sun. “Really? Is that appropriate?

“Then he said, ‘Oh, you’re wearing a Toronto Maple Leafs tuque, you shouldn’t be wearing that, they suck.’”

The mother took the insults as a clear sign to leave. She says her son was crying all the way home and asked who Paul Bunyan was. The mother says all she could tell her son was that Santa was having a bad day.

Upset over the issue, the mother went on the festival’s Facebook page to complain.

Just came back from the market and I am fuming! The market itself was so so, great freebies and great carol singers. But, I have a 3 year old and the reason we went there was for him to see Santa. SANTA WAS A JERK! My son waited in line during a cold and snowy afternoon and the first thing Santa told him was that his thick GAP black and red jacket made him look like Paul Bunyan. Then he also pointed out my son’s Toronto Maple leafs winter toque and said he shouldnt be wearing that and that the Maple leafs suck! What an awful experience for my boy, because Santa said his favorite team sucked! then my son wanted to know who Paul Bunyan was. It was the worst Santa experience! My initial post was deleted so I am reposting this.

The woman says she received an apology from the event’s organizers. The Toronto Sun also confirmed that the Santa has been fired.

And here we were thinking this sort of thing only happened in movies. This is the exact sort of thing that could scar a poor child for life.