The Tampa Bay Lightning have returned to the Stanley Cup Final, and they were sure to include their captain in their celebration.

The Lightning beat the New York Islanders 2-1 in overtime of Game 6 of the Eastern Conference Final at Rogers Place in Edmonton on Thursday night to win the series.

Anthony Cirelli sneaked a puck past Semyon Varlamov in overtime to send his team to its second Stanley Cup Final since 2015.

The Lightning brought out captain Steven Stamkos to celebrate with them even though Stamkos has not played since Feb. 25. Stamkos underwent core muscle surgery in March and has been trying to work his way back. He has been with the team but seems unlikely to play in the Cup Final.

The Lightning also ignored superstition and touched the Prince of Wales Trophy after eliminating the Islanders to win the conference.

Some teams follow the superstition, while others do not and are unaffected. The Lightning did not touch the trophy in 2015 when they lost in the Cup Final, so they had nothing to lose by touching it this time.

Tampa Bay, which was the No. 2 seed in the East, will meet Dallas in the Stanley Cup Final. Game 1 of the series will be on Saturday.

For the Islanders, they can be happy about their deep playoff run resulting in their first conference final appearance since 1993. They’ll have to wait at least another year before making it back to the Stanley Cup Final, where they haven’t played since 1984. 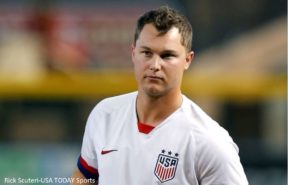 This is why Russell Wilson is reportedly intrigued by Bears

Some were surprised to see the Chicago Bears named as one of the four teams Russell Wilson would accept a trade to, but the Seattle Seahawks quarterback has clearly thought through things.
ESPN’s Jeremy Fowler reported that Wilson li Former LSU coach Les Miles was the subject of a harassment investigation by the school back in 2013, and the probe resulted in him being forbidden from contacting any female members of the student body.
An internal investigation report tha