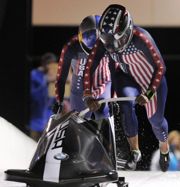 “I feel this year there was a certain agenda,” Eberling said. “It’s no fault of my teammates. There’s been a lot of inconsistencies and that makes you wonder what’s going on. It’s not right. … I know (Jones) didn’t pick herself. I know she’s not the one to be blamed.”

While it would be easy to label Azevedo’s and Eberling’s comments sour grapes, it should also be noted that there are members of the US men’s bobsled team who feel the same way.

“It’s hard for me to name one or two athletes that would completely agree with that decision,” veteran brakeman Curt Tomasevicz, who helped the US win a gold medal in Vancouver back in 2010, told USA Today. “Right now the media universe is blowing up right now, how Lolo Jones made the bobsled team along with five other girls, and that could be hard for the other girls as well as the men’s team.”

Tomasevicz added that some athletes on the men’s team even feel overshadowed by all the Lolo talk.

“We’re returning gold medalists and not getting much PR because all the bobsled attention is on Lolo,” he said. “It brings a lot of attention to the sport which can be a good thing, but I’m not just sure who is benefiting from that attention.”

Naturally, US bobsled officials scoffed at the notion that Jones’ popularity or marketability had anything to do with her making the final team.

“There is no doubt in my mind that people are disappointed that Katie and Emily did not make the team,” CEO of the U.S. Bobsled and Skeleton Federation Darrin Steele said. “But it’s never about publicity or marketing. The best way to market the sport is by winning. … The trending was going toward Lolo and she’s a great athlete and at the end of the day that’s who we think is a better brakeman for the Games. ”

Jones should be used to this by now. She entered the London Olympics as one of the most well-known Olympians, and some of her teammates were offended that Jones was still commanding all of the media attention after her disappointing performance. We can’t say for sure if Jones is going to Sochi for ratings, but the team is going to look really bad if she struggles.