Jaime Edmondson, Evan Longoria got their ugly sweater on Tampa Bay Rays third baseman Evan Longoria and his girlfriend Jaime Edmondson got engaged earlier this week. The couple has been dating for quite some time and has a daughter together, but they still manage to set aside time for themselves. We know this because Edmondson is always posting goofy pictures on her Twitter, like the one she shared on Thursday of her and Longoria rocking ugly Christmas sweaters. 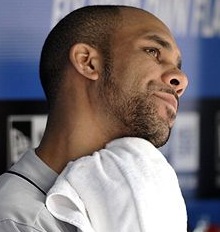 Evan Longoria and Jaime Edmondson are expecting their first child this week. Being the generous guy that he is, Longoria’s Tampa Bay Rays teammate David Price wanted to buy the couple something useful from their baby registry. After all, I can’t imagine there’s much a former Playboy Playmate and a professional baseball player can’t afford to buy for their child on their own.

According to USA Today, Price asked Longoria for some feedback on what he should get from the registry. From the sound of it, he was given an honest answer.

Such is life for a guy who will make $10 million in 2013 and probably another $200 million before his career is over if he remains healthy. Breast pumps can cost around $300, but relatively speaking a $300 gift from Price is like a $15 gift from someone who makes $50,000 a year. The flamethrower should have no problem affording it. That’s what friends are for. One fan appears to love Jaime Edmondson so much that he got a portrait of the model wearing a Miami Dolphins shirt tattooed on his leg. We don’t know the circumstances for the tattoo, but we’re guessing it comes from someone who is a hardcore fan of both the Dolphins and Edmondson, rather than someone who got it after losing a bet.

Jimmy Traina first posted the tattoo on SI Hot Clicks Monday. He even got a comment from Edmondson about it.

“I’m flattered,” Edmondson told Hot Clicks. “I just hope any future significant others of his are OK with it.”

I can’t imagine why they would have a problem with it.

Here’s what the original photo of Edmondson in a Dolphins shirt looks like for comparison.

Evan Longoria and Jaime Edmondson are having a baby Evan Longoria and Jaime Edmondson announced on Sunday that they are having a baby, and they did so in about the cutest way possible.

Edmondson, who is a former Miami Dolphins cheerleader and Playboy’s Miss January 2010, shared the adorable picture you see above as part of her announcement.

“Evan & I really appreciate all of the kind words & well wishes we have gotten today…we look forward to being parents,” she wrote on Twitter.

Longoria and Edmondson publicly confirmed they were dating back in February, though Edmondson says the two began dating a year before that.

The Rays signed Longoria to a six-year extension in November, which means he is under contract with Tampa Bay through 2022. The three-time All-Star and former AL Rookie of the Year bounced back from a down 2011 season by posting a career-high .896 OPS in 2012. He missed more than half the season with a hamstring injury, but returned in August. He underwent a procedure on his hamstring after the season and should be ready for spring training.

Congratulations to the couple.

It has been a long couple of days for some folks in Florida who are caught right in the path of Tropical Storm Debby. The Tampa Bay area among other sections of the state have been hit pretty hard with heavy rain, wind and flooding. Naturally, there have been a number of people with small cars who attempt to drive through deep puddles. This rarely ever works out. Fortunately for one of those people, Evan Longoria drives a large vehicle.

As you can see from the video above that his girlfriend, Playboy model Jaime Edmondson (pictures here), shared on Twitter, Longoria gave the unlucky motorist a friendly little shove to safety. Who says Americans are glutenous with their massive cars? The person in the compact car is certainly happy that our society takes pride in overindulgence.

H/T The Rays Index via The Big Lead

END_OF_DOCUMENT_TOKEN_TO_BE_REPLACED

Over the past several months, Playboy’s Jaime Edmondson has become the official Playmate of the NFL.  She has emerged as a staple in Jimmy Traina’s SI Hot Clicks, and fans of every team have had the luxury of seeing her sporting their colors.  Edmondson wasn’t wearing much during her NFL shoot, but there’s something football fans love about seeing their team’s colors on what little of her body is covered up. Who can blame them (us)?

Hot Clicks and Playboy recently teamed up to put together the top three moments in Super Bowl history — taken via a fan poll — and Playboy featured a photoshoot with Jaime recreating the historic moments.  The results were not disappointing.

For those of you who don’t know your Super Bowl trivia and/or aren’t thinking about football when you’re drooling over these photos, here’s a friendly reminder.  Moment No. 3 was inspired by Leon Lett’s premature celebration for the Cowboys during Super Bowl 27.  Bills wide receiver Don Beebe chased Lett down as he was prancing into the end zone thinking he had recovered a fumble for a touchdown and stripped the ball.  Dallas still smoked Buffalo.  Moment No. 2 is “The Dive” from a 37-year old John Elway who sacrificed his body for a first down with Denver and Green Bay knotted at 17-17.  Elway of course led the Broncos to victory.  As for moment No. 1 — there’s no way anyone has forgotten just yet.  In fact, I don’t even feel the need to explain it.

Definitely a fun idea from Playboy and Hot Clicks, to say the least.  What’s that? You want more Jaime? Fine, here’s more Jaime: