Umpire Carlos Ramos has history of being stickler for violations Serena Williams may be right: a male player might get away with some things that a female player would not. Regardless of gender, the behavior she displayed during the US Open finals on Saturday merited penalties, and Williams should have known that she was especially likely to incur such penalties when dealing with umpire Carlos Ramos.

Ramos has been at the center of several violations matters the past few years. Many of the calls he made were against high-profile male players, and in most cases, the men complained about the calls. Another matter even involved Serena’s sister, Venus, who was warned over the same coaching signals issue for which Serena was called on Saturday.

Here’s a look at some of Ramos’ history:

– In May 2016 at the French Open, Ramos asked Venus to tell her coach to stop giving hand signals. Venus defended herself and said she wasn’t cheating or looking at her coach.

Venus wasn't having it from the chair umpire in the midst of her 6-0 3rd-set demolition of Cornet. #RG16 @NBCSports pic.twitter.com/0dpEqwyjeD

– In 2017 at the French Open, Novak Djokovic was given a fault on his serve by Carlos Ramos for time violations. He then received a code violation for unsportsmanlike conduct after yelling.

– In 2018 at Wimbledon, Ramos gave Djokovic a code violation for slamming his racquet into the ground. Djokovic later complained about a double standard from Ramos, who did not penalize Kei Nishikori for something similar.

– In 2017 at the French Open, Ramos called a time violation on Rafael Nadal. Nadal thought the call was selectively enforced and said he was not satisfied with it.

– In 2016 at the French Open, Ramos called Nick Kyrgios for a code violation for yelling at a towel boy. Kyrgios accused Ramos of having a double standard and was described as “mystified” by the penalty.

– In August 2016 at the Olympics, Ramos called Andy Murray for a code violation for saying “stupid umpiring.”

– In July 2017, Ramos called Andy Murray for a time violation for playing too slowly. Murray acknowledged he had been warned before receiving the violation but was still bothered by it.

A USTA official told Larry Brown Sports that the judges/officiating crew information is released prior to the start of play in the morning. That means both Williams and Naomi Osaka would have known Carlos Ramos would be the chair umpire for the match beforehand. A good amount of preparing for a match includes knowing about one’s opponent. But in order to be fully prepared for a match, players should also know and prepare for the playing conditions, court conditions, fan atmosphere, umpires/judges, and everything that could influence the match.

Not only did Williams fail to shake off the violation calls from Ramos and instead let it rattle her to the point that it cost her a shot at her 24th grand slam singles title, but she also failed to properly prepare for the chair umpire. Had she done so, she would have known that Ramos has a history of readily calling violations, and she therefore should have known to be especially careful to avoid being penalized. 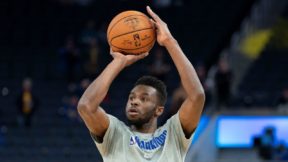