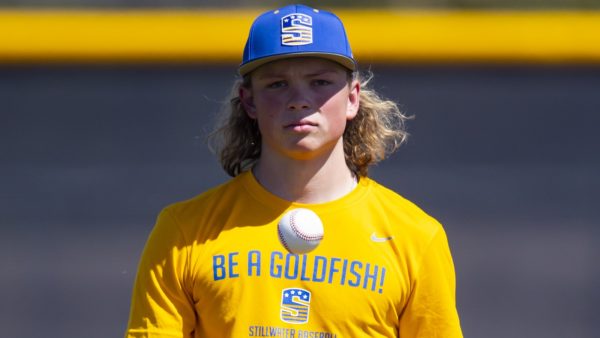 Jackson Holliday on Sunday became the No. 1 pick in the MLB Draft. Apparently that fate is something many people saw coming.

Holliday is the oldest son of former Colorado Rockies and St. Louis Cardinals outfielder Matt Holliday, a 7-time All-Star. Ahead of the 2007 World Series, the New York Times’ Tyler Kepner wrote a feature about the Holliday family.

Matt became an MLB All-Star and was also a top quarterback prospect out of high school. Matt’s brother Josh was a baseball star at Oklahoma State and now is the head coach there. The Hollidays’ father Tom was the Oklahoma State head coach prior to Josh. An uncle was a scout for the Rockies.

But the part that has the most relevance 15 years later is the section Kepner wrote about Jackson.

Here’s what folks were saying about Jackson Holliday when he was 3. From a profile I wrote on Matt and his baseball family before the 2007 World Series: pic.twitter.com/tvvjX1yDgl

Check out this section:

“Tom said he was already dreaming of finding a loophole to make his grandson eligible for the draft at age 15. Josh Fogg, the Rockies’ pitcher, said it was a given that Jackson would be a first-round pick someday. Asked about Jackson’s hitting prowess, infielder Jamey Carroll said simply, ‘Oh, he’s awesome.'”

They were saying this when Jackson was 3!

Here’s how Jackson looked at age 3.

some 3 year old video for ya pic.twitter.com/xPLVzAGga1

Now Jackson will have to sign to begin his pro career with the Baltimore Orioles. The 6-foot-1 shortstop posted absurd numbers in his senior year of high school. According to MaxPreps, Holliday batted .685 with 28 doubles, 5 triples and 17 home runs in 40 games for Stillwater High School. He also had 30 stolen bases and a 2.121 OPS.