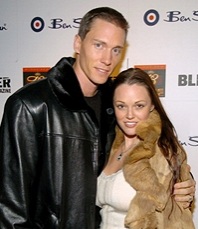 In 2004, Anna Benson infamously told Howard Stern that she would sleep with the entire Mets team — including the ballboys — if she ever found out that her husband Kris were cheating on her. Her husband is no longer playing baseball, but if Anna wants to get her revenge, now’s her chance.

FOX 411 reported on Thursday that Kris filed for divorce from his wife Anna in March after she suspected that he was cheating on her.

Anna told FOX that Kris began having an affair with one of her close friends while she was recovering from foot surgery earlier this year. She says Kris, who is now a money manager, was supposed to be helping her friend with financial advice while the friend was going through a divorce. Instead, she discovered evidence in the form of Facebook messages (naturally) that the two were having an affair.

“The two of them instantly started having an affair,” Benson told FOX. “It started with sexy text messages and that kind of stuff.

“She and Kris are both denying the affair, saying it was just ‘inappropriate talk,’” said Benson. “But I picked up his iPad and and I hit the Facebook button and looked at his inbox messages, and there were all of these sexy messages between them. And you just don’t talk with somebody like that that you’re not having sex with.”

That was enough for Anna to suspect Kris was cheating on her. She claims it’s the second time that he has cheated. In 2006, she filed for divorce but never went through with it.

Kris had Anna sign a prenuptial agreement that she says only entitles her to $4,000 per month in child support. The couple has three children together while Anna has a child from another marriage. She’s now complaining about her living situation, claiming Kris tricked her into selling the family’s home with the promise that he’d help them buy a cheaper home.