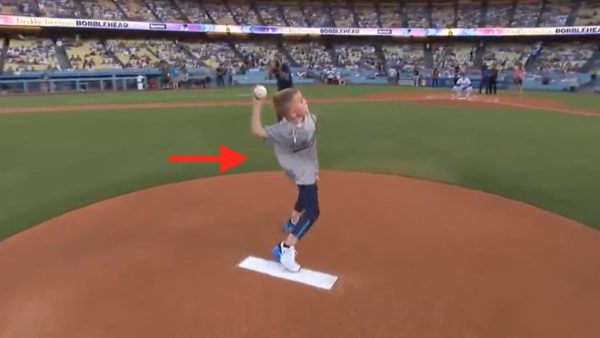 Charlie Freeman is only five years old but looks to be already following in his father Freddie Freeman’s footsteps.

The Los Angeles Dodgers had a Freddie Freeman bobblehead night on Wednesday, and had Charlie throw out the first pitch with his dad catching behind home plate.

While it is common to see many first-pitch throwers pitch from in front of the mound, the younger Freeman uncorked a powerful throw from the rubber. The throw forced Freddie to leap up into the air to prevent the ball from going to the backstop. Charlie then jogged in to give his dad a big hug.

Charlie Freeman with a cannon. 😳 pic.twitter.com/yIWmEZ03Vj

Charlie seems to have inherited some skills from his dad on the other side of the ball as well. During the 2020 postseason, a then-four-year-old Charlie was shown mashing balls off of a tee inside what looked to be a hotel ballroom.

While Charlie is more than a few years away from a potential career in the majors, Freddie Freeman is enjoying a productive first season with the Dodgers. In 109 games entering Wednesday, the elder Freeman led MLB in hits (137) and doubles (36), and had 15 home runs and 71 RBI.