Cubs fans lobby for Cole Hamels trade after getting no-hit 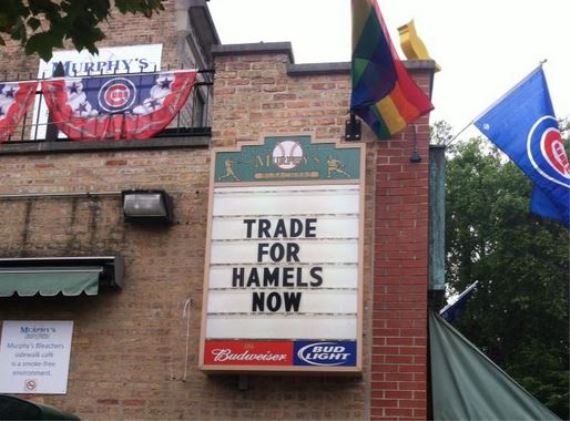 Phillies southpaw Cole Hamels fired the first no-hitter against the Chicago Cubs in 50 years on Saturday, and the reactionary effect is already in full throttle.

Barely 12 hours after watching their beloved Cubbies get incapacitated by the Philadelphia ace, Chicago fans posted the following ultimatum across the street from Wrigley Field.

The message across street from Wrigley Field pic.twitter.com/bv1MOVd6Hw

Recency bias aside, the Wrigley faithful have a point. Hamels is one of the top pitchers on the trade market this year, and he could certainly help push a 51-45 Cubs team over the top.

The 31-year-old has a 6-7 record in 20 starts this season. But wins and losses are always a poor method for evaluating pitchers, especially for one like Hamels with a 29th ranked Philadelphia offense (by both the classic metric of total runs scored and the more advanced metric of wRC+) behind him.

Hamels has posted a rock-solid 3.64 ERA and his FIP is surprisingly even better at 3.20. He has been known to keep the baseball in the yard and manufacture a healthy dose of weak grounders, while also boasting a 9.6 K/9 ratio in 2015 (his best since his rookie year). Additionally, Hamels is throwing both his fastballs (92.2 mph) and changeups (84.2 mph) at the highest velocity of his career this year. He would hypothetically benefit from a move from Citizen’s Bank Park (ranked 22nd in Park Factor) to Wrigley Field (ranked 30th, a.k.a the most pitcher-friendly ballpark in the MLB).

The Cubs have more than enough young prospects/farm system depth to pull off a move for Hamels. Their interest in him has been well-documented, particularly in recent days.

The five teams with the most recent interest in Hamels: #Cubs, #Dodgers, #Rangers, #Yankees, #SFGiants. Not listed in any particular order.

Cubs,Rangers &Dodgers are best positioned for a Cole Hamels deal (in order) because of packages they are willing to offer > Giants, Red Sox

Hamels’ contract isn’t too friendly, as he will be under contract until at least 2018 and is owed an average of $22.5 million per year. But the flipside of that argument is that a trade for Hamels would come with several years of club control, rather than the three-month rentals that have characterized pitchers dealt at the deadline in previous years (e.g. Zack Greinke, Jon Lester, etc.). He could slot into the rotation as another power lefty alongside Lester to balance the staff in between the Cubs righties of Jake Arrieta, Jason Hammel, and Kyle Hendricks.

The Cubs are currently 1.5 games out of a wild card spot with the July 31 trade deadline approaching. They would be smart to bolster their pitching staff with an impact veteran like Hamels.

If Hamels lands in Chicago, it already looks like Cubs fans will give him a warmer reception than they usually give the pitchers they trade for.

*Stats courtesy of Fangraphs and ESPN.com*