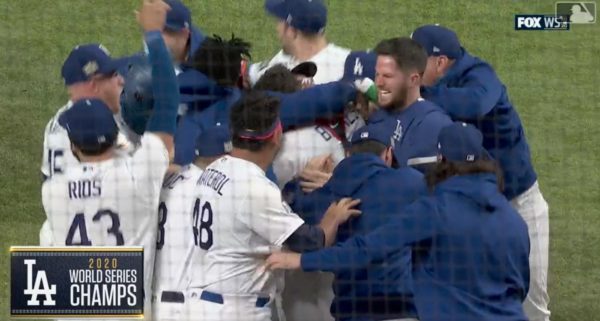 The Los Angeles Dodgers were not able to fully enjoy their championship on Tuesday night because of a scare involving Justin Turner.

Turner was removed before the eighth inning of Game 6 of the World Series because of a positive COVID-19 test. MLB had gone two months without a positive test until Turner’s, which put a damper on the celebration.

Not only were players concerned for Turner, but they also had to worry about whether they might be spreading COVID-19 after being in close contact with their teammate.

According to ESPN’s Jeff Passan, Dodgers players were set to receive rapid PCR tests upon returning to their hotels on Tuesday night.

When the Dodgers return to their hotel tonight, everybody will be given a rapid PCR test. On the field right now, as they celebrate, the Dodgers are wearing masks. Unclear as to whether they’ll stay in Dallas area before traveling back to Los Angeles. Situation fluid right now.

The Dodgers beat the Tampa Bay Rays 3-1 and turned around the game following a bonehead decision by Rays manager Kevin Cash. The World Series win marked the first for the Dodgers since 1988. Despite Turner’s positive test, the result was particularly sweet after the team lost the World Series in consecutive years before breaking through this year.