Rich Hill furious after being pulled from Game 6 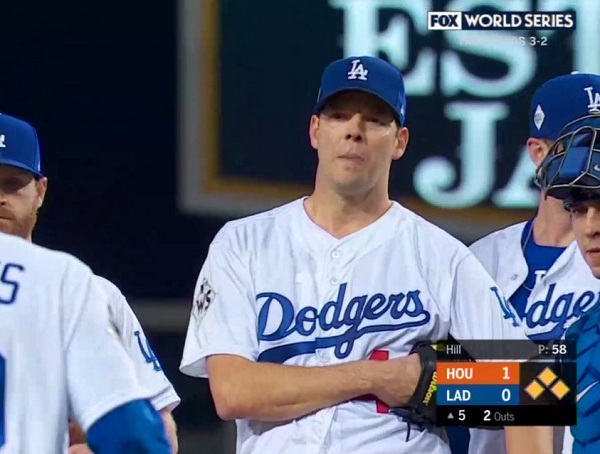 Rich Hill was pulled after 58 pitches in Game 6 of the World Series on Tuesday night, and he was not happy about it.

Hill was yanked after going 4.2 innings. He got into trouble in the fifth with a roped single by Brian McCann followed by a double from Marwin Gonzalez. He struck out the next two and then the Los Angeles Dodgers intentionally walked George Springer to load the bases with two outs.

At that point Dodgers manager Dave Roberts decided to pull Hill, who was not happy.

FTW you didn't do it but your dad grounds you anyway. #WorldSeries pic.twitter.com/HGVFysh9aY

FOX showed the southpaw knocking water cups over in the dugout:

Rich Hill with no regard for California’s water supply pic.twitter.com/Kz6BvLa5Tn

Brandon Morrow entered the game and got Alex Bregman out to end the inning and maintain a 1-0 score. After Morrow escaped the jam, Hill became a good teammate and was supportive.

Morrow gets out of it and Rich Hill has changed his tune. #WorldSeries pic.twitter.com/4zKGi1cWPl

At least you have to hand it to Roberts for being consistent. He’s utilized his bullpen heavily the entire postseason, and he committed to that strategy with the season on the line in Game 6.