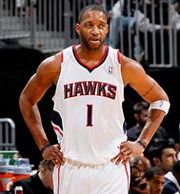 Tracy McGrady announced his retirement from the NBA over the summer, but that doesn’t mean he’s done playing professional sports. In fact, his former coach with the Houston Rockets, Jeff Van Gundy, says T-Mac is working towards a career in professional baseball. Seriously.

The note about McGrady came up during ESPN’s telecast of the Oklahoma City Thunder-Brooklyn Nets game on Friday night. ESPN showed a graphic of the players who had the most consecutive 30+ point games in the last 30 years. The stat came up because Kevin Durant had 12 in a row, making him two shy of matching T-Mac, who did it in the 2002-2003 season, and four shy of tying Kobe Bryant, who also did it during the ’02-’03 season. The stat prompted Van Gundy to share the baseball note about McGrady.

Play-by-play announcer Mike Breen was obviously stunned and asked if Van Gundy was being serious.

“I’m being serious. I’ve heard from sources in Houston — seriously — that he’s throwing over 90 miles per hour. The Sugar Land Skeeters — Roger Clemens pitched for them last year, it was awesome.”

Clemens actually pitched for the Skeeters two years ago, but his son, Koby, still catches for them.

As for McGrady, his interest in a baseball career is actually nothing new.

In 2006, McGrady said he wanted to pursue a career in baseball when he was done with basketball.

McGrady made his comments in an interview with TNT. T-Mac said then that he has a legitimate arsenal of pitches.

“I think I’ll be done with this game in my early 30’s,” McGrady said. “I would be a pitcher. I got a knuckleball, slider, changeup, curve and whatever.”

McGrady is an investor in a baseball team in Biloxi and has said that baseball is his first love. He was a two-sport star in high school.

The Skeeters have a slew of former major leaguers on the team, such as Jason Lane, Gary Majewski, Ryan Langerhans, David Pauley and Clay Hensley, so being able to compete at that level is no joke. But if he can throw 90+ mph and has different pitches, then McGrady might legitimately have the goods to compete. We sure would love to seem him try.

McGrady also has a relationship with the Skeeters; he threw out the first pitch at one of their games two years ago.

And if T-Mac does end up on the Skeeters, he’d be teammates with former LB travel ball teammate Steve Moss, who led the Skeeters with a .318 batting average last season!