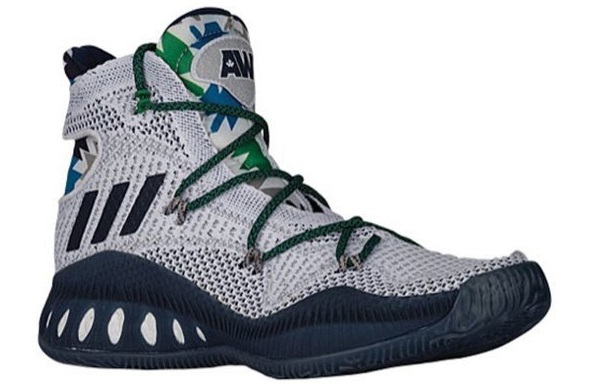 A look at the new adidas shoes Andrew Wiggins will wear next season went viral on Thursday, and the sneakers were met with the same derision as Steph Curry’s shoes were last week.

The Minnesota Timberwolves youngster has been with adidas since entering the NBA as the first pick in the draft in 2014. His last shoes were the Crazylight boost that were actually quite cool. Many on the ‘net do not feel the same way about the new ones, which are high-tops.

Wiggins’ shoes for next season are called adidas Crazy Explosive, and they go all the way up the ankle. Take a look at some of the jokes folks were making about them:

I knew I'd seen these before. pic.twitter.com/nGdO8atm0N

Why adidas put Wiggins in some Bass Pro Shop Mids?

These kicks come with khaki shorts and a bookbag FOH @22wiggins pic.twitter.com/exueSfoqnG

Adidas really bout to have Andrew Wiggins hooping in shoes that came straight from The Revenant's costume department pic.twitter.com/tuYWS1gwm3

Andrew Wiggins made shoes for when you going deer hunting at 7 but have a rec league game at 9:30

andrew wiggins with the rock climbing gym employee of the month 7s pic.twitter.com/XmjL9kZaU5

Gotta cop the new Andrew Wiggins shoes. Available only at Base Camp of Mount Everest pic.twitter.com/k2zC2gWl9A

"I can Ski in these too" 1's. #AndrewWiggins #Adidas pic.twitter.com/3f4mYkjxMZ

At least Steph Curry should feel good that he’s off the hook when it comes to sneaker jokes. But I still do think all the jokes about his shoes were funnier.