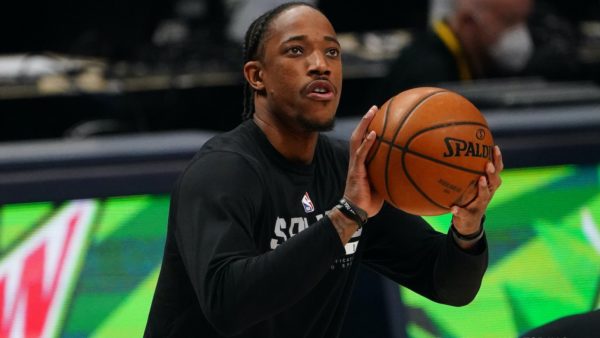 The Chicago Bulls star was given an unflattering distinction by a recent Bleacher Report article. The piece named DeRozan as one of the most overrated players of the last decade (along with Avery Bradley, Jamal Crawford, DeAndre Jordan, and Julius Randle).

DeRozan then issued an apparent response to the piece over the weekend. He tagged Bleacher Report in a tweet along with the “Ah s–t, here we go again” meme from the video game “Grand Theft Auto: San Andreas.”

Take a look (but obviously beware of the bad language).

It is hard to see any universe where you can call DeRozan overrated in 2022. He is a five-time All-Star (while all the other players on the list have a total of two combined All-Star appearances) and just had his best career season with Chicago at age 33. Maybe such a criticism could be warranted a half-decade ago when DeRozan was struggling to get over the hump in Toronto. But DeRozan would go on to become an elite wing playmaker with the San Antonio Spurs on top of his trademark scoring prowess. Now with the Bulls, DeRozan hits over 50 percent of his shots, has developed into a legitimate three-point threat, and even has the Jordan-esque clutch gene. If you think DeRozan (also a three-time All-NBA selection, mind you) is the same player that he was with the Raptors, you simply have not been paying attention.

Of course, DeRozan is no stranger to the disrespect (hence the “here we go again” reaction). He has had to put plenty of other sites in place for their lousy takes about him as well.