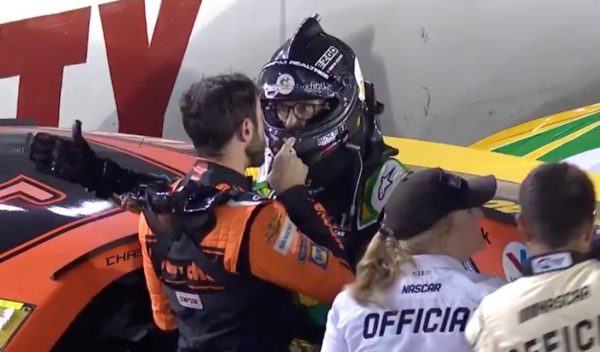 Kyle Larson took home the checkered flag at Bristol Motor Speedway on Saturday night, but the win likely would not have been possible without a huge assist from Chase Elliott. That assist led to a heated post-race exchange between Elliott and Kevin Harvick.

Elliott led for 175 laps before Harvick passed him with 33 to go. The hard racing between the two drivers left Elliott with a flat tire and Harvick in position to win. You can see the move below:

Elliott was furious over the way Harvick passed him. After going to pit row for a new tire, he returned to the track and deliberately got out in front of Harvick to slow him down. That allowed Larson to pass Harvick with four laps remaining and grab his sixth win of the year. Harvick and Elliott immediately confronted one another after the race.

The heated debate continued after the two drove their cars to the garage. Harvick, who clearly had not cooled down, told Elliott he is going to “run you the f— over” before he walked away.

Chase Elliott and Kevin Harvick had a second chat after their initial encounter on pit road. pic.twitter.com/edriKwbjed

Elliott, 25, is 20 years younger than the 45-year-old Harvick. He told a reporter he is tired of Harvick pulling stunts like the one that resulted in Elliott’s flat tire. Harvick accused Elliott of throwing a “temper tantrum.” The fans seemed to be on the younger driver’s side, but Harvick said he didn’t care.

"They can boo all they want, I don't care … I'm ready to rip somebody's freaking head off."- Kevin Harvick was not happy with Chase Elliott after Bristol pic.twitter.com/qw92hC44de

That is far from the first time we have seen a heated exchange after a NASCAR race. We even saw a fight where real punches were thrown earlier this year (video here). Elliott and Harvick were simply giving the people what they wanted.