Congratulations are in order for Seth Curry and Callie Rivers, as they got engaged on Thursday.

Curry proposed to Rivers in front of their families during a Valentine’s Day dinner at Ruth’s Chris Steak House in Charlotte, according to TMZ Sports.

Rivers, the daughter of NBA coach Doc and sister of Austin, sent the following tweet:

Seth Curry plays for the Portland Trail Blazers and is averaging 6.2 points per game while shooting 46.5 percent on threes. This is his fifth season in the league. His father is former NBA player Dell Curry and his brother is former MVP Steph Curry. The union of the two will bring together two of the most NBA families around. 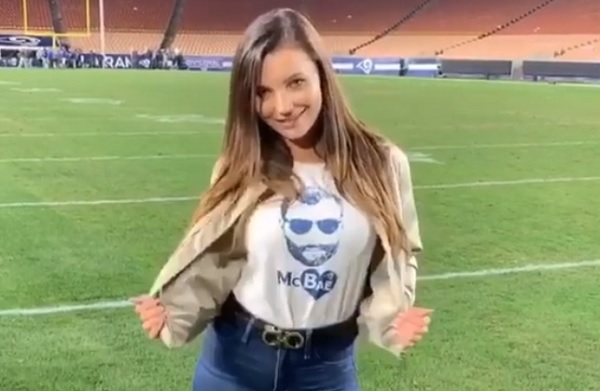 Veronika Khomyn is in Atlanta to support boyfriend Sean McVay as he coaches the Los Angeles Rams in the Super Bowl. She’ll also no doubt be dressed for the occasion.

Khomyn showed off the perfect T-shirt after the Rams’ home playoff win over the Dallas Cowboys in the divisional round of the playoffs. Her shirt features an outline of McVay’s face along with a play on words that calls him “McBae.”

On to the final four

“Bae” is a new colloquial term similar to babe. The shirt couldn’t be more fitting in this case.

Khomyn has been dating McVay since his time as an offensive assistant with the Washington Redskins. She moved out to Los Angeles with McVay when he was hired by the Rams and has been along for the rise to success. Tim Tebow has a new woman in his life.

In an interview with ESPN’s Pedro Gomez, Tebow confirmed that he is dating South African model Demi-Leigh Nel-Peters, the reigning Miss Universe.

“She is a really special girl and I am very lucky and blessed for her coming into my life,” Tebow said, via ESPN producer Charles Moynihan. “I am usually very private with these things but I am very thankful.”

Rumors that the two were an item spread in recent days after Tebow’s sister Katie shared a picture of them together on her Instagram account.

Fun hanging on the set of the heisman shoot! @timtebow @robbytebow @demileighnp

This is not even the first time Tebow has dated a Miss Universe winner, though the last time didn’t work out so well. The former quarterback seems to be in a good place right now, with a happy personal life and some success professionally as well. END_OF_DOCUMENT_TOKEN_TO_BE_REPLACED

Zach Ertz wife Julie is ‘best athlete in the family’ Zach is a former second-round pick by the Philadelphia Eagles out of Stanford who made the Pro Bowl following another strong season. He met Julie at a Stanford baseball game in 2012 and got married last year. Julie, formerly Johnston, has been with the US Women’s National Soccer Team since 2013 and won a World Cup with the team in 2015.

Both are incredible athletes, but who’s the best in the family? Zach says it’s Julie.

“Julie is the best athlete in the family. I’m never going to argue that. She’s a phenomenal athlete,” Zach said in an interview with NFL Network’s Michael Irvin during Super Bowl media week.

Zach also said he’s trying to keep up with her in the trophy department.

“Julie won a World Cup, so I need to hold up my end of the bargain, my end of the family. Obviously I got a lot of pressure on me … she’s an amazing athlete and I’m proud of her.”

“Julie is the best athlete in the family. I’m never going to argue that.”

Julie was playing in soccer friendly during the NFC championship game and couldn’t watch, but her reaction to learning the Eagles had won was superb.