John Calipari: Tyler Ulis should be national player of the year 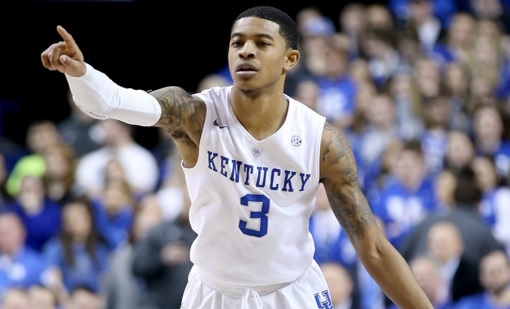 Tyler Ulis has already been named SEC Player of the Year, but his coach John Calipari believes more honors are in order.

After Kentucky closed out Texas A&M 82-77 in overtime Sunday to win the SEC Tournament, Calipari praised his sophomore guard.

“He’s the player of the year in the country, everybody knows it,” Calipari told ESPN. “But they’re afraid to say it because he’s 5’9″. (They say) there’s no way a guy 5’9″ could be a first-round draft pick, but Isaiah Thomas is doing OK right now in Boston. So, I think the little guy is coming back, and this guy is proving it.”

Ulis scored 30 points on the game, shooting 10-of-17 from the field and 7-of-8 at the free throw line. He averaged 24 points per game during the conference tourney. He’s also averaging over seven assists per game for the season, including 14 assists against LSU earlier this month and 11 assists against Florida in the prior game.

Though Calipari is stumping for his player as national player of the year, many believe the race is between Michigan State’s Denzel Valentine and Oklahoma’s Buddy Hield.