You know what they say about stealing soda from a restaurant … it’s just a gateway to stealing bigger and better things later in life … like crab legs.

Jameis Winston and two other men were accused of stealing soda from a Burger King near the Florida State campus on July 21, 2013. The incident didn’t come to light until last November, when it was finally reported in the context of the Winston sexual assault case. It was easy at the time to brush aside the event as a college kids being college kids kind of thing, but placed in a greater context it looks bad now. 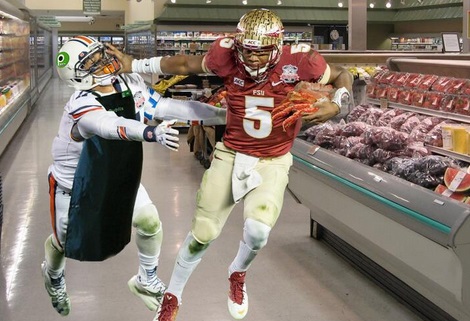 The phone call a Burger King assistant manager made to police was published by TMZ on Wednesday. In the call, you can hear how annoyed the employee is.

“I need three teenagers removed from my store,” she says.

The employee says the three guys were “causing a scene” in the front of the store after she caught them stealing soda. She also complained that they wouldn’t leave.

Like I said, it was easy to brush aside Jameis getting busy in a Burger King soda room at the time, but when you look at what came up later — the crab leg incident — it all kind of amounts to Winston being a shady character. Plus, then you add in the sexual assault allegation, and it could make some people more suspicious.