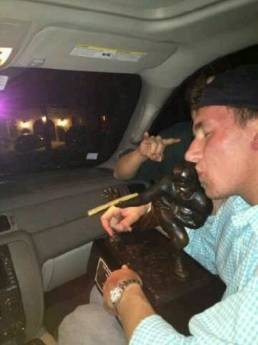 The picture seen above of Johnny Manziel kissing his Heisman Trophy while the stiff arm is supposedly holding a blunt has been circulating on the ‘net, but the Texas A&M quarterback says it’s a fake.

The Manziel photo was first posted by Outkick the Coverage on Monday. Clay Travis, who posted the photo, knew it would go viral, so he asked Texas A&M for a comment. He hasn’t received a response from the school, but the QB did address the picture:

ABSOLUTELY PHOTOSHOPPED. People are always out to get me…sorry for kissing my trophy

The photo being taken on 4/20, which is essentially a national holiday for pot smokers, led Travis to believe it was legitimate, though he did allow for the possibility that it was a fake. Manziel was also in his hometown of Kerrville, Texas, over the weekend, and he had his trophy out for pictures.

Manziel was part of a photo controversy earlier this offseason when he was seen with a Texas Longhorns tattoo on his torso, which was later determined to be a Henna tattoo.

So, are you buying Manziel’s explanation, or do you think the photo is real?