Does Johnny Manziel have a Texas Longhorns tattoo? [Update: No] 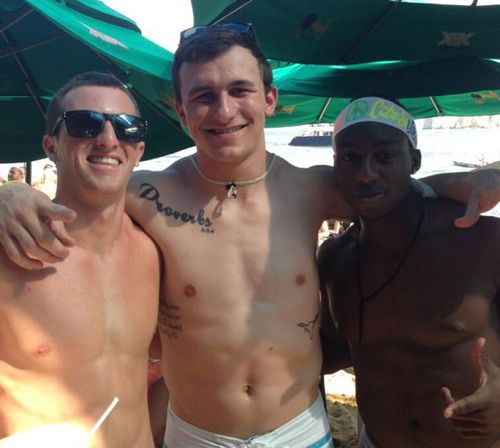 Photos of Manziel on vacation hit the ‘net this week, and one in particular is getting attention. A reader sent in the above photo to Busted Coverage that appears to show Manziel with the Texas Longhorns logo tattooed on his torso.

There is plenty of speculation that the tattoo is a fake photoshop job. We’re not experts in the field of identifying phony photos, but we do know that Manziel is a Texas fan. Just look at what it says in his Texas A&M bio:

Manziel, whom A&M coach Kevin Sumlin hasn’t yet made available for interviews this season, grew up a Texas Longhorns fan (he often sported UT gear around Tyler), but Texas didn’t heavily recruit him. In fact Florida coach Will Muschamp told his players during halftime of this year’s A&M game that UT, where Muschamp had previously served as defensive coordinator, only wanted Manziel as a defensive back.

That’s probably enough to make the fans in College Station want to puke, but that’s life. This may very well be a fake photo, but it wouldn’t be the first time we have seen a college athlete with a regrettable tattoo from a rival team.

UPDATE: Manziel later said on Twitter that the tattoo was fake.

Does that mean Manziel got a fake tattoo of a longhorn on his torso? If so, then he really does enjoy messing with his fans.