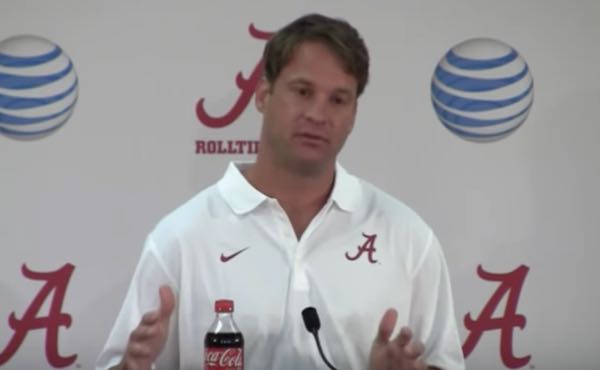 Lane Kiffin thinks that he might have made a difference in Alabama winning the national championship last season.

In a feature for The Washington Post, Kiffin says because the game was so close, he thinks he could have made a difference.

“It was rough,” Kiffin told The Washington Post’s Adam Kilgore. “It got really rough when you watched the game. At first, the idea of, ‘Okay, do your job. Focus on this one.’ But really when you watched it, and because they lost, and it was so close. If they lose by a lot, you don’t feel like, ‘Okay, would there have been a difference?’ You lose by one play, one second, it’s natural to think, ‘Okay, you could have made a difference.’ If they won, it wouldn’t have mattered. I would have just been happy for them. That was the hardest part, how it ended.”

Kiffin told Kilgore he feels that the continuity and existing relationships he had with his players were big advantages he had over Sarkisian, who was stepping into the position at a critical time.

“I do,” Kiffin said when asked by Kilgore if he felt he would have made a difference. “It’s no disrespect to Steve. No matter who it was, you’ve been there all year long. You’ve been there for the quarterback. You’re all he knew. You were undefeated together. We’ve won [26] straight games together. You feel like, okay, it’s different. As great as Sark is, it’s just different. Again, if it had been 14 points either way . . . when it’s one play here or there, you think if those guys had the person they were used to, it would have made a difference.”

Even though Kiffin is tooting his own horn and candidness is somewhat surprising, it’s not a stretch to think that he could be right. Alabama took a risk making a significant coaching change before their biggest game of the season. That was a strange time to make the change, and it could have cost the team. Then again, had Bo Scarbrough not gotten hurt in the game, the Tide may have won it, even with Sarkisian as their coordinator. So why did Bama make the change before the title game? We believe the https://larrybrownsports.com/college-football/why-lane-kiffin-exit-fired-alabama/342020interview he gave to SI was a big reason why.