NFL scout on Jameis Winston: He is a ‘fraud’ 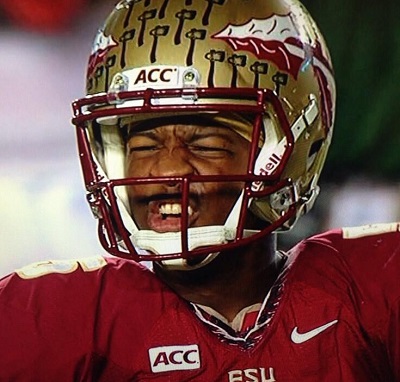 Jameis Winston’s immature behavior is costing him in the eyes of NFL scouts.

The Heisman Trophy winner was cited in April for stealing crab legs at a grocery store. He was suspended this week for the first half of Florida State’s game vs. Clemson because of an obscene phrase he yelled in the middle of campus. It also has been revealed that he stole soda and acted disrespectfully at a Burger King in July, 2013. He was also investigated in 2012 for his involvement in a BB gun fight that resulted in broken windows at an apartment complex.

What’s interesting is that Winston always seems to say the right thing to the public in his press conferences, and then he goes out and behaves like a complete imbecile. The quarterback’s tendency to say the right thing and act like a jerk when the media is not around led one NFL scout to call him a “fraud.”

Speaking in light of Winston’s suspension for yelling the obscenity this week, an NFL area scout told NFL Network’s Albert Breer that the incident will hurt the QB in the eyes of scouts.

“It’ll hurt him significantly,” the area scout told Breer. “Especially with all the stuff going on in the league. This may force him to stay another year to clean up his image. He’s a fraud. You can’t believe anything he says, because he keeps doing the same things over and over. In my mind, there are night-and-day differences between (Johnny) Manziel’s and his character concerns. Winston has some serious issues.”

Winston was projected to possibly be the No. 1 overall pick in the draft if he left school following the season. You have to wonder if he has scared away some teams with all the allegations he’s faced.