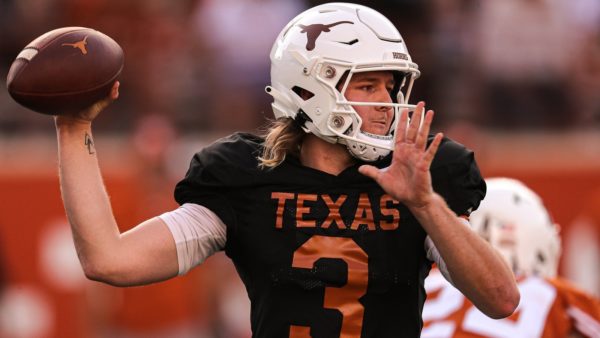 There was a big development ahead of Saturday’s Red River Rivalry game.

On Thursday, we learned that Texas quarterback Quinn Ewers will return from his shoulder injury to play against Oklahoma. Ewers had missed the Longhorns’ last three games after getting hurt against Alabama in Texas’ second game of the season.

Oklahoma coach Brent Venabales was asked earlier in the week about whether the Sooners would have to change their preparation depending on which quarterback plays for Texas — Ewers or Hudson Card.

“My guess is it won’t affect either side,” Venables said. “I know it won’t for us. They’re going to run their system. They’ve got tremendous football players. Their quarterbacks have played really well. So whether it’s Card or Ewers, I don’t see something dramatically different in what they do. I don’t see a whole from them, expectation-wise, game-planning, in what they would do different.”

Venables: “Whether it is Card or Ewers, I don’t see something dramatically different in what they do.” pic.twitter.com/9hD33xFIUn

Venables is probably using the most diplomatic response possible. But Ewers won Texas’ starting job over the offseason, which suggests the Longhorns should be better off with him at quarterback.

Texas enters the game 3-2 with losses to Alabama and Texas Tech. Oklahoma is similarly disappointing at 3-2, with losses to Kansas State and TCU in consecutive games.