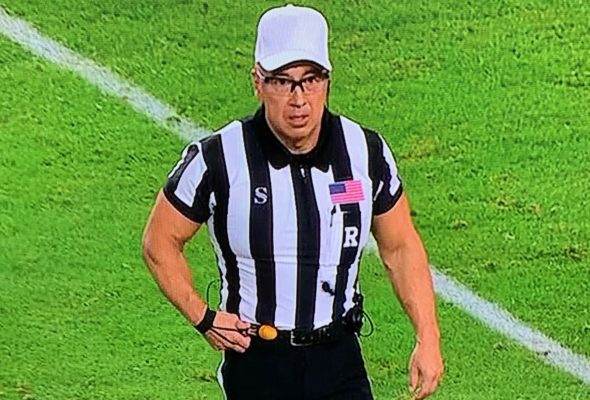 The head referee for Friday’s College Football Playoff semifinal game between Georgia and Michigan went viral thanks to his physique.

Scott Campbell led a Big 12 officiating crew for the playoff game between the Wolverines and Bulldogs. He stood out immediately because of his bulging muscles.

Simply put, the guy is ripped. And viewers noticed it right away.

“I’m Scott Campbell, the referee, and I’d like to challenge each of you do a dead lift right here in front of this entire stadium and the world viewing on television."

Look at Scott Campbell and his smedium ref blouse. Gun show is here to keep this game under control. #orangebowl #CFBPlayoff

Even ESPN announcers Kirk Herbstreit and Chris Fowler got in on the fun.

“Scott Campbell’s with the guns out,” Herbstreit joked. “These officials get in the big games, they get the curl machine out.”

“They get the smedium shirt and show it off,” Fowler added in jest.

Good on Campbell. If you have the muscles, you have to show it off like Ed Hochuli.