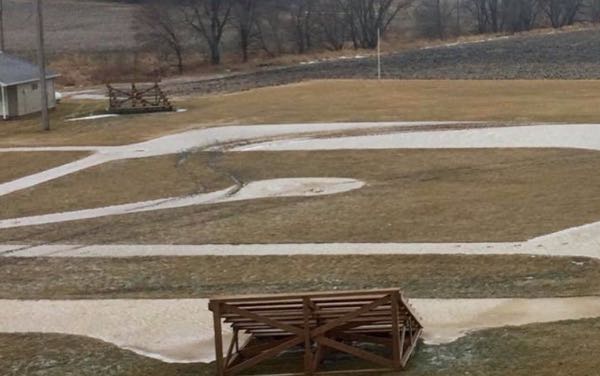 The grounds people who are in charge of keeping up the iconic “Field of Dreams” ballpark in Iowa will have a lot of work to do before baseball games are played there again, as the field was vandalized this week.

In a post on Tuesday, the official “Field of Dreams Movie Site” Facebook page revealed that someone drove onto the field with a car and tore up the turf. Photos showed deep tread marks in both the infield and outfield.

Denise Stillman, the owner of the property that was used in the 1989 film “Field of Dreams,” anticipates that the vandals caused thousands of dollars in damage. She called the act “upsetting,” and field manager Al Steffen said the recent weather in Dyersville, Iowa made the situation worse.

“There are gashes up to four inches deep in the outfield,” Steffen told John Kruse of the Telegraph Herald. “Whoever did it was really able to dig in.”

The park is scheduled to host games in just over two months, so the timing is not ideal. Stillman said the sprinkler system was damaged in addition to the grass, and repairs could take an entire season to complete. Despite that, the field will remain open to the public.

“A lot of people travel (from) all over the world to come see the Field of Dreams, and they don’t always check Facebook to make sure we are open,” Stillman said. “We’ll just have to keep operating as is.”