Man robbed at gunpoint on bike, captures it on GoPro camera (Video) 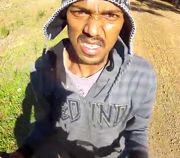 Assuming this video isn’t a well-executed viral prank, it is a fantastic example of how frightening the world can be.

A man was minding his business riding his mountain bike through some trails in Somerset West, South Africa, recently when he was approached by a man holding a gun. The armed robber demanded that he turn over his bike and any other valuables, but he forgot to take the GoPro camera.

According to the YouTube description, the thief — who had two accomplices — made off with the bike, a cellphone, car keys and Oakley sunglasses. He looked directly into the GoPro at one point but decided not to take it. That ultimately led to his arrest, as the footage produced an image of the robber that was clear as day.

Fortunately, the biker was not injured in any way. He handled the situation well and did what he was told, which was wise. And, just as you might have figured, the camera footage helped lead to arrests.

From The Citizen in New Zealand:

With the help of the GoPro police managed to arrest two suspects on Sunday, a day after the incident occurred, with the third being arrested on Monday.

“Thorough investigation work led investigators to the suspects with the help of the footage,” said Traut.

The three men made a brief court appearance on Tuesday and will remain in custody until their court date later this month.