Cam Newton managed to keep the news private for several months that he was expecting to father a child, but it was finally revealed a few weeks ago that the Carolina Panthers quarterback and his girlfriend had a baby boy.

The whole thing went down around Christmastime. Newton had left a practice early during the week of the team’s game against the Atlanta Falcons. There was speculation that his girlfriend, Shakia Proctor, had gone into labor. Adding to that suspicion was that Newton rocked a football to sleep like he was holding a baby while doing a touchdown celebration.

Newton said after the game there was no significance to his baby rocking gesture, but he then announced on Twitter a few days later that his girlfriend had a boy.

My longtime girlfriend and I were extremely blessed to have a son last week. Our family is excited and thank you all for the well wishes!

I've been quiet about this because I didn't want to create a distraction for my team and appreciate the privacy in this joyous time.

Newton’s girlfriend goes by Kia, and she used to strip at Stadium Club in DC under the name Hazel. She has a daughter from a previous relationship. 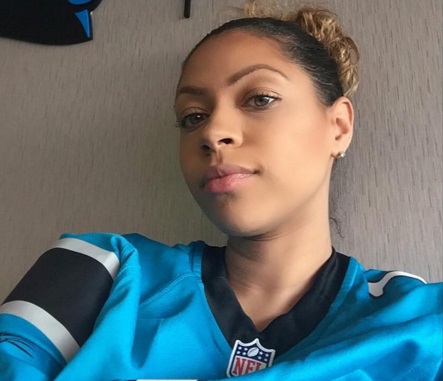 Newton’s son is named “Chosen” (that’s not a joke). Prior to the NFC divisional round playoff game between his Panthers and the Seahawks, Cam wore a shirt showing himself and his son dabbing.

Unfortunately for Cam fans, that adorable shirt is not for sale. Maybe one day Cam Newton and Under Armour will make it available to the public. You know it would sell like crazy.