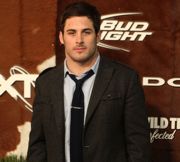 Since news of the tragic Boston Marathon bombings broke on Monday afternoon, a number of athletes have been doing what they can to pay tribute to the victims and help the healing process. New England Patriots wide receiver Danny Amendola, who is much closer to the incident this year than he would have been a year ago, has vowed to help out in the form of donations.

Amendola, who signed a five-year, $31 million deal with the Patriots last month, has already come up with a creative way to help the victims and their families. Early Tuesday morning, the 27-year old tweeted that he plans on donating money for every pass he catches and drops during the 2013 season.

I will DONATE $100 for EVERY pass I catch next season to whatever “Boston Marathon Relief Fund” there is. And $200 for any dropped pass.

Hopefully these gestures keep rolling in. We already saw Ben Revere pay tribute to the people of Boston with this message on his glove during Monday night’s game, and many others across sports did the same. Every bit of assistance is needed at a time such as this.