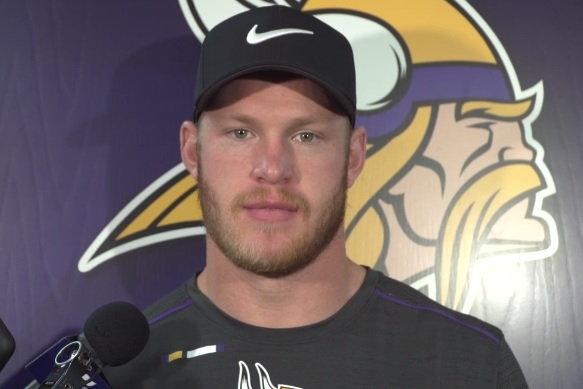 When the Vikings signed Kyle Rudolph to a five-year, $36.5 million extension in 2014, it seemed like a strong investment for the future and a deal that would likely age well. However, despite a solid 2016 campaign, that has not been the case. Rather, Rudolph has failed to live up to expectations, eclipsing 800 yards only once and never reaching double-digit touchdowns. Now, in 2018, Rudolph is on the books for $7.675 million, which is the highest cap hit he’ll account for over the duration of the contract.

In 2016, the Indianapolis Colts signed Dwayne Allen to a four-year, $29.4 million contract extension that included $16 million in guarantees. A year later, they shipped him off to the Patriots, who have yet to address the bloated contract. In his first season with New England, Allen’s production plummeted as he recorded just 10 receptions for 86 yards and one touchdown. That level of futility really highlights the annual salary in excess of $7.25 million.

Entering free agency, Demario Davis was considered a low-end linebacker option likely to sign in the latter stages of the offseason at a team-friendly price. Instead, the defensive-hungry Saints signed him to a three-year, $24 million deal that will account for a cap hit of $3.3 million in 2018 before ballooning to $8.5 million and $9.9 million over the next two seasons. His five seasons in excess of 100 tackles may have something to do with that, but a Pro Football Focus grade of 73.7 (average) offers a better idea of what New Orleans can expect from Davis.

After hiring Dave Gettleman as their new general manager, the Giants cleaned house when it came to overloaded contracts. And while they added some new ones — making Nate Solder the highest-paid left tackle in the league comes to mind — Rhett Ellison’s four-year, $18 million still raises eyebrows. And while that may change under head coach Pat Shurmur, who worked with Ellison in Minnesota, the $4.5 million annually salary seems excessive for a backup tight end with a limit roles.

After seeing his role reduced with the Titans, Avery Williamson hit free agency this year and the timing couldn’t have been better for him personally. Due to a few panic signings that changed the market and a lack of quality linebackers available, the Jets signed Williamson to a three-year $22.5 million deal with a whopping $16 million guaranteed. That’s not a bad deal for a former fifth-round pick who saw his defensive snaps decrease a season ago, but one that might be reflected on poorly for the Giants.

Jordy Nelson had a remarkable career with Aaron Rodgers as his quarterback, but at 33 years old, he took a sharp downward turn a season ago, hauling in just 53 receptions for 482 yards and six touchdowns. Despite that, the Raiders opted to gamble on Nelson, signing him to a two-year, $14.2 million deal with $10 million guaranteed. That’s quite a hefty price tag for an aging veteran the team didn’t really need.

The Eagles have few bad contracts and when they signed veteran Tim Jernigan, it did not appear as if that would end up being one. However, after enduring a serious back injury months after inking a four-year, $48 million deal, the perception of that deal changed. And while Philadelphia did make a few adjustments to the deal — specifically to bonuses — Jernigan and his 70.0 (average) Pro Football Focus grade are on the books for a cap hit of $5 million in 2018 before the money really becomes substantial from 2019-2021.

The Steelers acquired Vance McDonald in a trade with the San Francisco 49ers and he came complete with a three-year, $19.65 million deal that has yet to be modified. That’s a pretty penny for a player who has never had more than 30 receptions, 391 yards and four touchdowns. The deal looks even worse entering 2018 when McDonald will count for $4.319 million against the cap. The fact that he’s also dealing with plantar fasciitis only adds to the sour taste of his bloated contract.

Kyle Juszczyk remains one of the best fullbacks in football, but his four-year, $21 million deal remains unique in that he was considered an “offensive weapon.” Juszczyk certainly has been that, averaging 4.4 yards per carry a season ago to go along with 315 yards receiving with one touchdowns. Still, Juszczyk was given a 70.4 Pro Football Focus grade (average) last season, which isn’t the sort of analytics you’d like to see associated with a fullback averaging over $5 million per season.

Choosing a bad contract on the Seahawks is quite subjective given that the vast majority of players over the 2% total cap threshold deserve to be paid big. One of the few exceptions is Justin Britt, who was signed to a three-year, $27 million extension with $17.25 million guaranteed in 2017. He accounts for 3.35% of the team’s total cap number in 2018, and that comes on the heels of a 2017 campaign in which he finished with a Pro Football Focus grade of 65.3 (below average).

Once upon a time, DeSean Jackson was one of the most dominant and effective wide receivers in all of football. That, of course, is why the Buccaneers chose to pair him with Mike Evans on a three-year, $33.5 million deal with $20 million guaranteed in 2017. However, Jackson put up some of the worst numbers of his career last season (50 receptions, 668 yards and three touchdowns) and finally looked as if age was catching up to him at 31. It was not and will not be the sort of production that warrants over $11 million per season.

When the Titans signed Logan Ryan to a three-year, $30 million deal in 2016, it came as a bit of a surprise because it was well over his perceived market value. And in his first season with Tennessee, it became abundantly obvious why that perception existed; Ryan was average at best, earning a 65.4 PFF grade. And in a twist of irony, that bloated deal resulted in the Titans having to pay Malcolm Butler even more in free agency earlier this year.

Tight ends seemed to dominate this list, so it’s only appropriate to end things with Jordan Reed. After hauling in 87 receptions for 952 yards and 11 touchdowns in 2015, the Redskins signed Reed to a five-year, $46.75 million deal with $22 million guaranteed. In two seasons since then, Reed has missed 14 games while hauling in 93 receptions for 897 yards and eight touchdowns. In 2018, he’ll account for a cap hit in excess of $10 million, which is about what his cost to the Redskins will average over the next several years.