Some footage has been released from the encounter Johnny Manziel and his girlfriend Colleen Crowley had with police last week, and it shows that Crowley was extremely upset over whatever had happened between the two.

One video, which was obtained by FOX 8 in Cleveland, features audio of Manziel explaining to officers that Crowley threw his wallet out the window and then was trying to jump out of the car. He said he grabbed her arm and told her to get in the car and that he would find the wallet later.

More dashboard cam footage from NewsNet5, which was shot from a different officer’s car, shows a rattled Crowley speaking with police:

The 911 call from the incident has also been released. The caller said Crowley appeared “intoxicated.” You can hear what we assume is Manziel yelling, “Baby please! I’m sober, please! Let me take you home.”

No charges were filed, as police apparently felt that Manziel was sober enough to drive and that neither he nor Crowley was in danger, even though both admitted they had been drinking. Crowley later downplayed the incident with a post on social media. 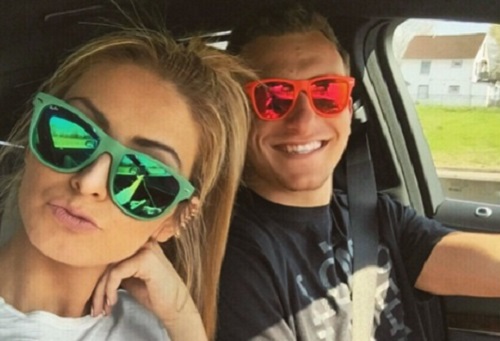 It’s unclear if the Browns plan to discipline Manziel, though we know how at least one former NFL coach would handle the situation. Whether the argument was Manziel’s fault or not, the Browns have to be irritated over what happened.