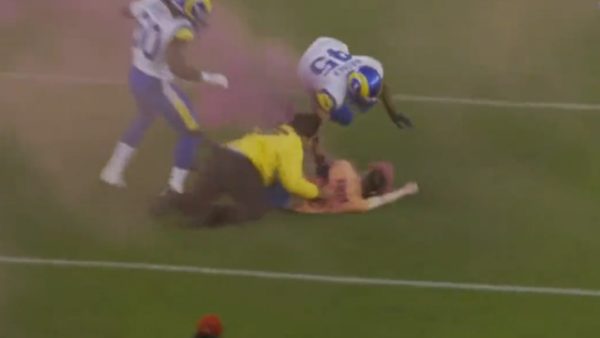 Monday night’s game between the Los Angeles Rams and San Francisco 49ers was briefly interrupted when a spectator ran onto the field, and Kevin Harlan was ready for it as always.

Harlan calls “Monday Night Football” games on Westwood One Radio. The longtime announcer is known for delivering commentary of game interruptions with the same enthusiasm he would an 80-yard touchdown pass. He kept the tradition alive when a nimrod ran onto the field at Levi’s Stadium in Santa Clara, Calif.

THE TRADITION IS BACK! Idiot On The Field, as called by Kevin Harlan: pic.twitter.com/5oRvHo0qTJ

As you can see, the fan was leveled by Rams defenders Bobby Wagner and Takkarist McKinley. Peyton and Eli Manning had great reactions to that during their alternate “Monday Night Football” broadcast (video here).

While most networks try to avoid giving streakers attention, Harlan has always made it part of the show. He delivered a legendary call in the Super Bowl two years ago when a similar situation arose.