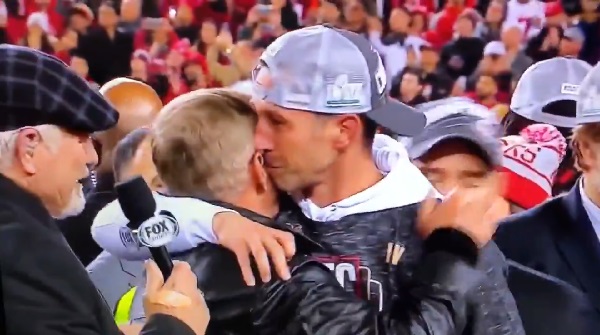 FOX and the San Francisco 49ers staged a neat moment after the 49ers beat the Green Bay Packers to advance to Super Bowl LIV.

Former head coach Mike Shanahan was brought down to present the 49ers with the trophy after their 37-20 victory. The honor was supposed to go to 49ers CEO Jed York, but York stepped aside and had Shanahan hand the trophy to his son Kyle, the head coach of the Niners.

This is a really neat moment, especially when Kyle goes in for a hug and Mike wastes no time getting out of his son’s way to let him have his moment.

Mike Shanahan has been around the 49ers this season and even has a game ball from a win that will have felt particularly sweet to him. Now he gets to hand a championship trophy to his son. That’s just plain cool.