One Las Vegas Raiders fan went viral on Sunday night for the great outfit he wore to the team’s home game against the Kansas City Chiefs.

A fan was wearing an Al Davis outfit and got some camera time from NBC:

The fan had the outfit perfectly to honor the late Raiders owner. From the sunglasses to the glasses chain to the turtleneck, sweater and jewelry, the fan nailed it.

Davis was the owner and general manager of the Raiders from 1972 until his death in 2011 at the age of 82. He began his association with the franchise in 1963, when he became the team’s head coach. His son Mark now runs the franchise.

Halloween may have been two weeks ago, but it’s never too late to have a perfect costume. 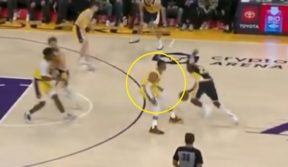