Marcus Mariota, Gerald McCoy might have long-term injuries for Raiders The Las Vegas Raiders may have had some players suffer long-term injuries in the team’s win over the Baltimore Ravens on Monday night.

Gerald McCoy was carted off with a knee injury. Denzelle Good suffered a torn ACL that will keep him out for the season. And Marcus Mariota reaggravated a quad injury.

Raiders head coach Jon Gruden says that he planned to use Mariota more on Monday but the backup quarterback strained his quad.

Mariota scampered for a 31-yard run during the game and could have done more damage if he didn’t get hurt.

In addition to McCoy, Mariota and Good, Yannick Ngakoue suffered a knee injury in the game. It’s unclear how much time, if any, Mariota and Ngakoue might miss. The Raiders visit the Steelers in Week 2. 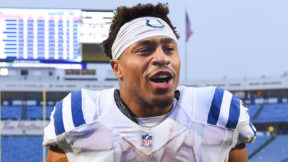